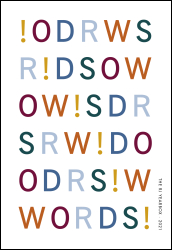 For more than half a century, Riksbankens Jubileumsfond has promoted research in humanities and social sciences. Since 2008, the Foundation has been issuing a Yearbook. In later years, the Yearbooks have been produced in the form of booklets with separate essays, collected in a box – a Yearbox.

This is a series of ﬁve booklets that make up the English version of The RJ Yearbox 2021. They explore such subjects as the history of languages, minority languages and the connection between words and thoughts.